I have traveled to the Netherlands twice before. Here’s a travel tip if you’ve missed it in my earlier blogs: it’s usually pretty cheap to fly into Amsterdam. Even cheaper if you’re coming in the fall. When creating this trip out of thin air, I found a one way ticket on British Airways (it turned out to be American … you can read about that adventure here) for $250 per ticket for a 14 hour trip from Orlando to Amsterdam.

Other options I considered were a $300 ticket, 17 hours from Tampa to Oslo, and a $325 ticket 15 hours from Orlando to Copenhagen. They were the most reasonable travel times I could find to Europe from Florida that were under $400.

I love me some Nederlands, and since this was going to be Boyfriend’s first trip across the pond, I wanted to share some of the things I love with him: stroopwaffles, cycle culture, Dutch hospitality, little treats you get with your coffee, and how every car stops for pedestrians. We come from a world where walking and cycling are extreme sports, so I am always stoked to be a pedestrian in Europe.

I have never stayed in Amsterdam. I hear it’s a lovely city. One day, my adventures will keep me there. However, we wanted to see things that other people don’t. The AMS airport has a train station within it (as many major hubs do in Europe), and it’s super easy to catch cheap rail to surrounding towns. I have stayed mostly in Den Haag, and though Grote Market called to me, I made the decision to book us a place in Rotterdam for the night.

I did book through AirBnB, but it was actually a hostel that just uses AirBnB as an extra capture method and I love that. CityHub was our destination, a 10 minute walk down from the beautiful Rotterdam train station. I’ve never done a hostel before, but the reviews were encouraging, and it was only for a night.

Now, on this trip, Boyfriend has to log into work as much as possible. The WiFi on the train was not as strong as I had experienced previously in Europe, so like lack of WiFi on the tin can we flew over in, he continued to be unable to work during travel time. It’s been kind of a theme. 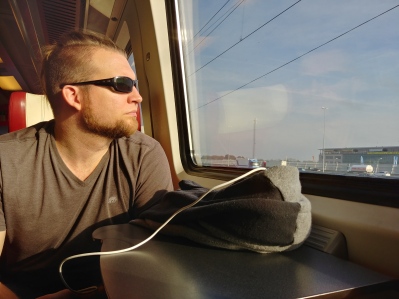 As we drug our bags over the cobbled sidewalks (everything is cobbled in Europe & UK, research solid gear. I’m going to be honest: though designed originally as a gear bag for roller derby, my Roller Derby Elite rolling bag has been PHENOMENAL on these trips and have weathered all the rough terrain AND they fit size guidelines of carry-ons in USA & Europe), towards our destination and we stopped in L’Ouest on the way because I was goddamn hungry.

And I figured out that I know just enough Dutch to have no idea what the menu said. Google Translate’s app helped us immensely, though when food time did come he ended up with my Croque Madam. *shakes fist* The wine selection at L’Ouest was OFF THE CHARTS. If I hadn’t been so riled up for beer I would have let them change my mind about what wines the Netherlands chooses to stock (had some rough nights in Den Haag with some house reds that I’m still recovering from). With our phones plugged into our power bank (another solid investment), I was tempted to drop a lure at the PokeStop within reach and just drink the afternoon away, but desire to check into our accommodations (and Boyfriend’s ability to keep me honest) won the day.

Luckily, there were other Stops within striking distance of CityHub.

CityHub was a really unique space, and super hospitable: they have someone on duty 24/7 to greet, answer questions, and help you get sorted. They use wristbands as keys for the entrance ‘after hours’ and for the rooms. No plastic keycards!  There is an app ready for download so you have access to that human throughout your trip, and it also gives you the option to change the lighting in your room. The lounge area is also accessed with the wristband. Self-serve coffee, beverages, beer, and light snacks are available just through the scanning of your wristband [that is linked to your credit card]. The bougie water is free. 😉

Now, Boyfriend is 6’4”. The room itself was VERY small. What they have done is converted shipping containers into upper and lower bunks, giving the outside of each room a Tetris feel. Space for your luggage is SUPER limited, and I was afraid of feeling claustrophobic at first (we had a “lower” room). The bed was the biggest we’ve encountered, and was crazy comfortable, and the pillow were actually supportive! ((Note: For a big dude and a chick who’s messed her body up doing “the derbz” for the last 9 years, supportive bedding wins big in our book.))

There are hooks on the wall with a clean robe for you, and towels ready for use. The bathrooms are shared, but they were sparkling clean. I didn’t shower there, but Boyfriend said the water pressure and temperature was just dreamy. Yes, they have soap.

After dropping stuff off, taking a 3 hour nap, and changing into some fresh clothes we decided to go exploring for a bit, and we decided dinner and drinks were on the docket for the night. Honestly, that was going to be on the docket most nights.

Here’s the thing about how I travel. I rarely do the tours or the galleries or the expensive walkabouts. I will say, “What direction?” and go. Now that I had Pokemon to catch (Mr Mimes do not appear in America at all), and a new town of raids & gyms to liberate for the American resistance (joking), we used that as a guide.

We just walked. We looked at the architecture, the new construction, we marveled at how every place had ‘café’ and I explained to him that you shouldn’t go into a Coffeeshop hoping for a latte (did that on my first trip. Oops). We were in the “Cool District”, close to the train station and not too far from the big tourist shopping district. We went through the giant stores and USA-brand capitalism for a minute and then doubled back to find food closer to our hostel.

After continued walking and me finally saying, we’re going to go [here], we got us some noodles. There were a lot of Ramen-inspired places in the section and though I was excited for more European food, neither one of the Floridians were adjusted to the cold of northern Europe, plus we were groggy from the travel yet. Soup would be delicious. Oh, and it was. The soup gave us LIIIIIIIIIIIFFFFFFFEEEEEEEEE.

Then we popped over to Café de Witte Aap. We noticed a King Kong theme amongst the hostel, bar, and another shop across the alley way. Turns out the owners have a couple different businesses and King Kong just kind of became a thing.

Ok, so for anyone who’s been in Europe, you know that most places play 80s-00 pop and rock most of the time. Like, a ridiculous amount of Natalie Imbruglia, Enrique Inglasis, and Duncan Shiek (mind you, I have no problem with this). The music in the pub went from typical Nederlands fair to salsa to borderline metal. We were there for it. The bartenders were SUPER friendly and chatted us up about our trip in between helping Boyfriend and I pick beverages.

Throughout the blog, I’ll be posting screenshots from my Untappd account so you can see our ratings on things, as well as talking about them in text. A note about our individual tastes: Boyfriend tends to the ciders, sweet wines, and (now) lambics. I am all over the board. I don’t like things that are super sweet but can absolutely go for the occasional cider or lambic as long as the flavor is balanced. The only beers I actively avoid are American Pilsners and those that are whiskey/scotch/bourbon barrel-ages. I trend away from Brown Ales (though I’m finding a taste for them), English Bitter Ales, and Scottish ales. I tend to have big groupings of beer preferences. I went through a Saison phase when I moved to Florida. For a while up north, I was in a coffee stout period, and I currently am in my Belgian tripel phase. I tell you, as the reader, this so that if you see my reviews and get a little uppity or confused, it’s quite possible that I just have different tastes than you. ^_^

In this particular place, Boyfriend got a Timmerman’s Kriek, but I went for a Bloesem Blond from Gebrouwen Door Vrouwen, and I highly impress upon you THAT YOU SHOULD TRY THEM BOTH (on draft preferably).

Not every beer will get a “GO FIND IT RIGHT THE HELL NOW”, but a fair few in Europe are proving to be my best beer experiences. The Bloesem Blond one is lightly floral, with citrus notes. It uses elderflower in the mix and it just has a really unique crispness to it that I wanted to keep enjoying. The bartenders said that they usually only carry it in spring, but it’s so popular that they decided to just keep it on their taps. And thank goodness they did. The other cool thing about this beer, is that the brewery is a female owned and operated business started by two sisters from Amsterdam. You can check out their crew on their site. The Timmerman’s Kriek was a perfect cherry lambic with a balanced tartness to sweetness. I couldn’t get enough of it – I kept stealing sips. Cherries are my favorite fruit and the lambic was JUICY. Like, it made your mouth water as you drank it.

I could have spent the whole night in that place, it was super chill and very friendly. The people from the hostel next door were in and out, and making friends. There were also a few pokestops within reach and someone kept dropping lures so I was content racking up presents, but Boyfriend was the voice of reason and we headed back to our room, a block away. The stereotype about public transportation around Europe being pretty easy? It’s true. I had downloaded the Trainline, GoEuro, and Flix Bus apps and figured out we could nab a bus ride from Rotterdam to Antwerp the next day for €4 as opposed to the €15 train per person. The train would have been a little quicker, but it was only a 90 minute trip, and there was free wifi on the bus, and still went off from the Rotterdam train station which was just up the road. So everything was set for our next city. 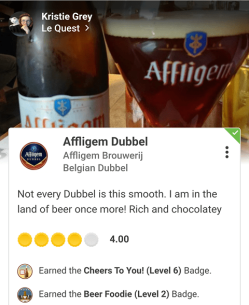 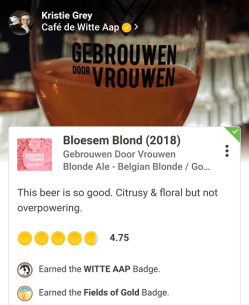